Why are coaches so concerned with core strength and stability?

The most important technique or factor in scoring well in archery is Core Stability. Without a solid core, an archer will need to be very lucky to get a good score. The core is the foundation of the shot – without a solid core there is little an archer can consistently do to overcome instability. The core is said to be over 80% of the shot and all technique needs to be built on top of a solid foundation.

To show how important the stability of an archer is during the shot, I turned to maths and used trigonometry to see how many points would be lost if an archer moved during a shot.

Considerations made in determining the points lost included:

No consideration was given to the skill of the archer, the wind or any other excuses commonly made for missing the middle!

The following data shows the points lost based on the amount of movement or deviation of the archer at their draw length. The deviation was correlated to the offset for the arrow on the target and hence the resulting loss in score, including accounting for any line cutters.

On a 122 cm target face, the deviation, shown across the bottom of the graph, is the amount of wobble during the shot in mm. I have more charts showing other target face sizes if you are interested.

So, using a large-faced target and an archer shooting at 50 metres we can see that an archer who may have been aiming at the middle but wobbled by 9mm would not be able to score any points. 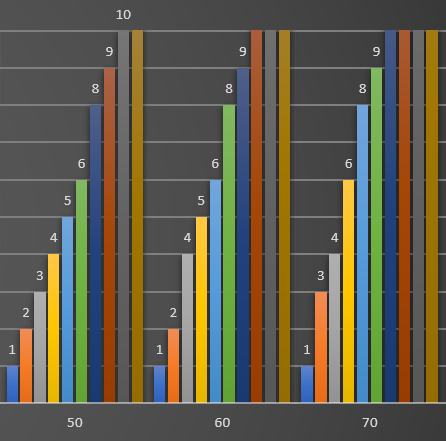 To not lose any points at 70 metres, an archer cannot wobble by even 1mm.  So the World Cup archers we watch on TV shooting 10s are very accurate and very stable in and throughout their shot.

As one of our top recurve archers points out, scoring 10s is easy – just point it at the middle and don’t wobble!

What can you do to score more points?

It is easier to stay solid in the shot and have a good consistent technique to score more points than it is to be lucky or be doing all this maths!